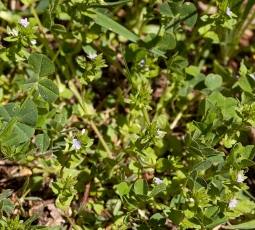 It won't fit through the hole!!, Christophstal April 2020 I got up early again as we were hoping to see a wryneck. No luck with that.

The blue tit was trying to get some more nesting material into his nest box, but he couldn't fit it through the hole. He eventually gave up and dropped it.

I checked the cellar trap as we tend to get frogs and toads getting trapped in there around now. There were no amphibians, but I disturbed this fine twenty-plume moth, Alucita hexadactyla. This is quite an unassuming moth (its wingspan is only ~15mm) until you see it up close. I've included two photos which show its plumes with spread and closed wings. You may notice that there aren't actually twenty plumes - it's a stupid name. As the Latin name suggests there are 6 plumes on each wing.

It reached 20oC on the patio this morning and the insects are beginning to wake up. I found a new shield bug for the garden, a pied shield bug, Tritomegas bicolor.

As I reported yesterday, the dandelions are important nectar sources at this time of year as this brimstone butterfly illustrates.

Later in the afternoon, we spotted a treecreeper on the birch and a female hawfinch was singing in the bird cherry (not sure if you can call those weak chirps a song).

Finally, the cold weather has broken. Next week is predicted to be warm and today was the start.

I got up with the sunrise to see if there were any interesting birds about. Apart from this crested tit, there wasn't much going on.

I spent a bit of time watching the other birds once the sun came up properly and warmed things up a bit.

The blue tit who had nabbed our first nest box, now has a mate and they were both moving in today. Our second nest box has finally got some attention - this time from a great tit. This second nestbox is meant to be designed for nuthatches, but so far they haven't shown any interest.

I took some photos of a greenfinch in his breeding colours and a brambling, as the bramblings will soon be gone until next winter.

There were a couple of mistle thrushes hopping about today too and lots of black redstarts.

The first dandelion has opened in the garden. I spend a stupid amount of time each spring trying to keep them under control but this early they are an important nectar source so this one can stay for now.

Finally, please look away if you're sensitive, as promised a couple of weeks ago, I've captured a male red squirrel displaying his wedding tackle - to show how easy it is to sex them when they're hanging upside down.