A Tale of the Daisy

The daisy tends to grow along our paths as it is a plant which tolerates compacted ground. It also comes back quickly after we have strimmed the paths so it’s overall a tough plant.

In winter, we get quite a bit of snow but the ground doesn't stay covered the whole time. The snow comes and goes but is most likely in January and February. We have had snow in April and generally the spring starts around two to three weeks later here than in the Rhine valley. But the daisy flowers as soon as the snow melts, sometimes even deepest winter. The daisy can survive up to minus 15 degrees apparently and closes up for protection when it is cold or in the evening - perhaps this led to the name day's eye, as it opens during the day. The scientific name for the daisy is Bellis perennis - ‘perennis’ for everlasting and 'bellis' which may come from the Latin for pretty. The girl’s name Daisy is also a nickname for someone called Margaret, from the French name for the oxeye daisy, Marguerite.

These flowers I painted had quite a lot of magenta on the petals. The head is made of lots of tiny florets - each a flower in itself - yellow florets in the middle and white band florets. You can eat the flowers and I use them to decorate salads. The leaves are also edible but get more bitter as they get older. In the past, the daisy was used for treating wounds and lots of other ailments, for example as a drink with honey to help with coughs as it contains saponins. 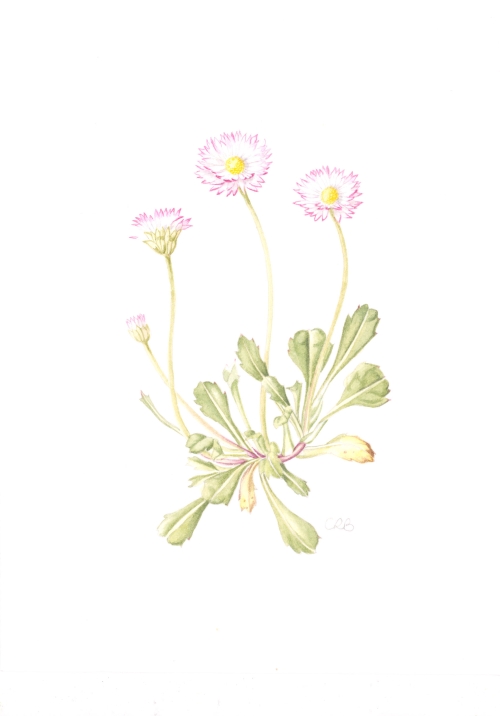 A Tale of the Dandelion