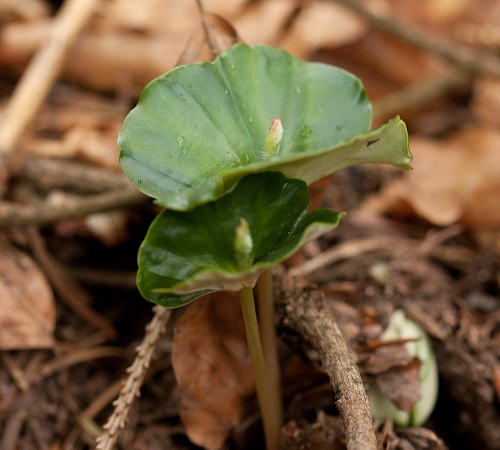 This morning I saw something lurking under one of the cuckoo flowers in the garden. I bottled it up and then could see that it was our first tick of the year. This is probably one of the Ixodidae family - a large, hard tick. I've never seen it discussed how a tick on a plant stem manages to transfer itself onto a rapidly passing animal (or human). This individual seemed to cast a web when I knocked it off the flower head. I've not seen any mention of that before.

In the afternoon we went for a walk up the Finkenberg. There has been a lot of tree felling recently - including the one shown in the photo. It was our understanding that all the trees that had the tree plaque on them were specially protected by a scheme set up in 2000.

We saw a red deer in one of the clearings. There were also lots of crossbills calling from the tops of trees. I managed to get one photo of a juvenile drinking at a puddle. I had the wrong lens on the camera so it is a bit fuzzy.

On the way back down we spotted some strange plants we'd never seen before. The fact that they were only under beech trees gave the secret away - they were beech saplings. Very strange-looking. 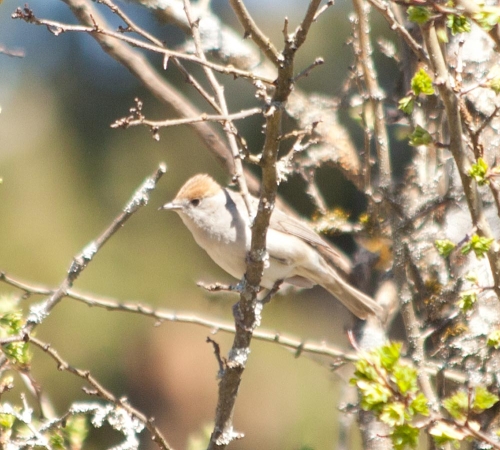 The female blackcap visited again and I managed to get a half decent photo this time.

At around 16:30, I saw a strange thing flying around outside my office window. I went downstairs with my camera to take a picture and managed to get a couple of terrible shots. It was quite clearly a bat - flying in full sun!

Today we had our first swallow/swift/house martin visitors of the year. They didn't stay long and they are very difficult to photograph - so no photos today. 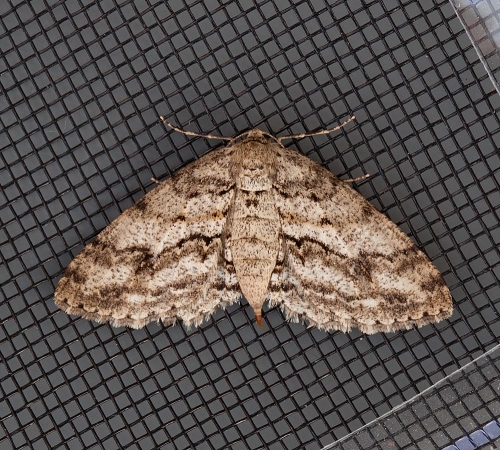 Yet another one of my overwintering moth pupae emerged yesterday. The caterpillar was collected from hemp nettle in the garden at the beginning of August. This was a female mottled beauty - a fairly common species.

It's not very exciting, but a wood pigeon briefly visited the pond to drink. I had hoped for a more exciting bird to become our 60th species recorded in Christophstal. A common crossbill visited the pond a couple of times today. I got some photos, but they were terrible.

We also had only our second sighting of a Blackcap from the house, this time a female. Again, my photos were poor but that was mainly because she was sitting behind a branch.

Back in June 2014 we collected an emperor moth caterpillar down by the fish ponds. Today a beautiful female moth emerged. This gave us the opportunity to test the stories I'd heard on how effective female moth pheromones are in luring males. I expected to have to wait a couple of minutes, but as soon as we opened the door to take her outside, two male emperor moths were flying around the net cage she was in. I'd not recorded an emperor moth in the garden before, so this is a new species.

After a few seconds, we opened the net and let one of the males at her. The other male flew off dispirited.

As a parting gift, she deposited a hundred or so eggs on the wall, so we'll have some work to do feeding them through the summer. Today we took a walk to a special area in the Christophstal which has four species of club moss growing. We didn't really expect to find any as they are generally hard to see, but we easily found Fir clubmoss and Stiff clubmoss. We'll have to return again to see if we can find the others. 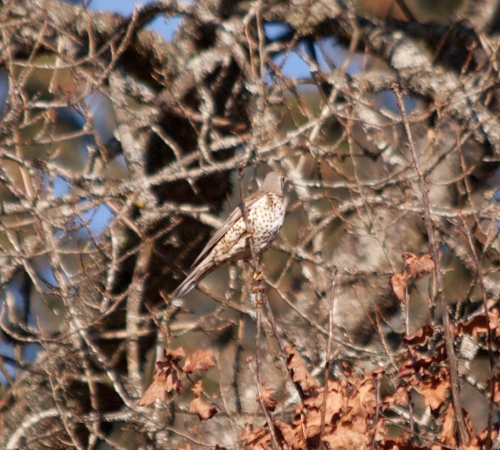 There were lots of interesting birds in and around the garden this morning. A red kite gave me a nice fly-by as I was photographing some fieldfares and a common redstart. Later on we saw several birds gathering nesting material including some hair that Christine had taken off her brush and put outside specially for the birds. The photo of the great tit is not the one gathering Christine's hair though!

In the afternoon, we went for a walk down the valley. There were a few squashed amphibians on the road as well as the reptile photographed on the right. The blue colour is very confusing. However, after extensive Googling we came across a reference to Post Mortem Cyanism. So this would appear to be a Sand Lizard (Lacerta agilis) which would have originally been green.

While looking at the frog and toad spawn in the pond, Christine noticed some watercress which is a new entry to our 'around the house' species list. 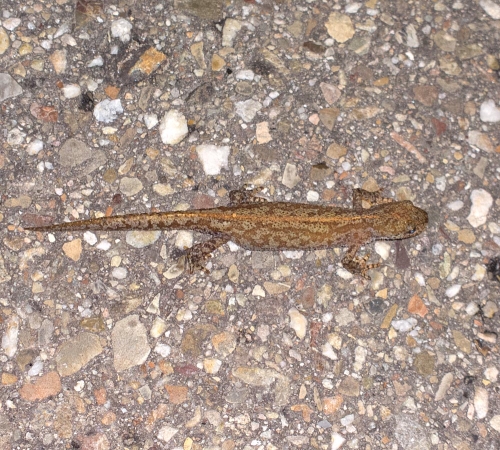 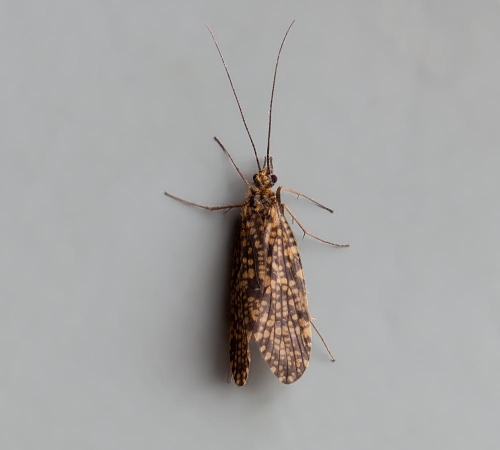 It was mild and there was light rain in the evening. The toad migration is continuing.

This evening we saw a few newts crossing Talstrasse near the bridge. They looked like Great Crested newts, probably female - but we're no experts on amphibians.

There was a very attractive Philopotamus montanus caddis fly in the bedroom.

I walked down to the fishponds - there were three grey herons in the trees and a coot on one of the ponds swimming with some mallards. On the way back I saw two male Orange tip butterflies along the top of the dry stone wall. It was a very warm and sunny day. Late last night we found large numbers of toads crossing the drive to the pond. It was a slightly wet evening but milder than it has been. The toads are active in the pond today and more joined them during the day.

Peter had two new species for the valley in the moth trap last night, a brindled beauty and a pale pinion - both are quite common. 367 species of moths and butterflies have now been recorded in the garden. This was the first trapping of the year. That meant along with the Corydalis, it had been a good day for new discoveries.

We walked down to the dry stone wall at the pump station and counted around sixty plant species. We couldn't find any more amphibians on the road luckily. At the river bridge we looked at the banks and found Bulbous Corydalis - Bird-in a-bush. Later in the evening from the kitchen window we saw a bat flying in the garden.

There were at least two mice today at the shed. One had climbed down from the upper floor to reach the bird table.

We saw a field mouse under the bird tables today. 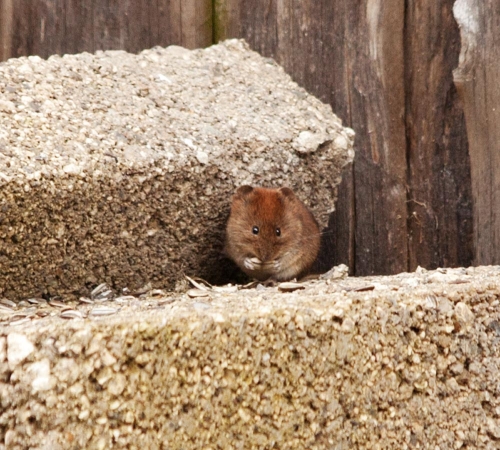 We spotted this bank vole taking sunflower seeds from under the bird feeder this morning.

I also added an animation of one of the long tailed tits eating a peanut. Click on the image to see the animation. Another busy day at the bird table with the boisterous and, frankly, aggressive siskins keeping the other birds away.

As the daylight was fading, I caught a glimpse of a treecreeper out of the back window and managed to get a grainy, distant photo. 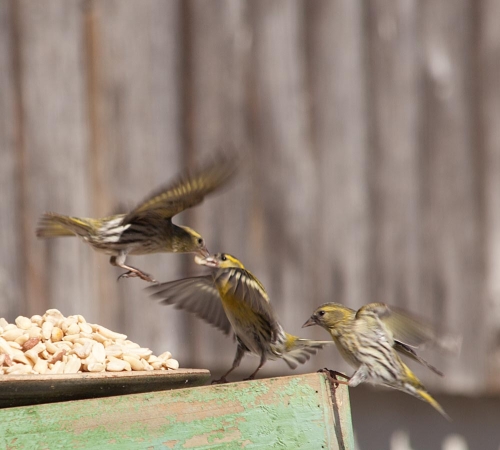 It has been a very wet and cloudy day today. The bird table is groaning under the weight of the siskins. We counted over fifty. They are eating the peanuts at a rate of knots and have also been tucking into the nyger seed I put out for the goldfinch yesterday. The goldfinch did come back yesterday but ate the sunflower seeds in the new feeder instead. I hope he comes again today. 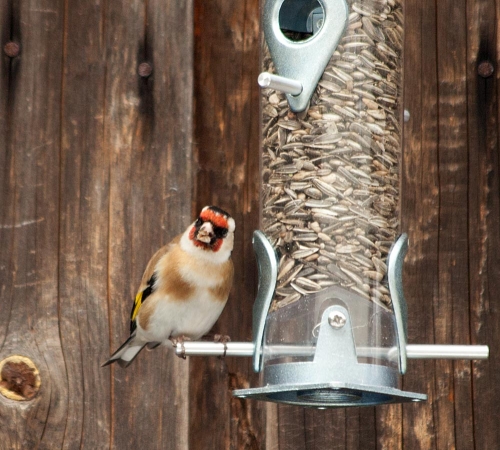 There was a hard frost last night but the sun came out during the day and the bird table was very busy. There was a song thrush hopping about in the garden all day and we got some nice photos. We saw a goldfinch visit briefly in the afternoon but it didn't stay. I have now hung out the nyger seed again and hope to tempt the goldfinch back. We woke up to a deep covering of snow, which was quite a surprise. I was amused that I had had the winter tyres taken off yesterday. The weather continued to be really horrible. We're overrun by siskins and bramblings at the moment. We were going to stop the peanut supply this week as last week, when the weather was warmer, they weren't being eaten. Now it looks like we'll have to keep it going another week or so.