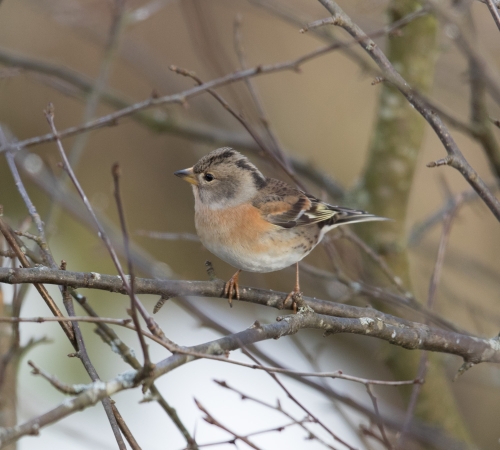 It's been a while since I had any time to spend taking photos of the birds in the garden. Here are some I took today.

The snow has receded and revealed a large number of sunflower seeds under the feeders. This morning, there were six red squirrels in the garden monopolizing all the food sources. This photo was taken through a window with my camera phone - hence the poor quality. It snowed quite heavily today. This red squirrel was using his tail as a kind of warm umbrella.

There's another red squirrel that has been visiting regularly who has a badly injured back leg. He seems quite healthy, but he does have some problems getting around. A great white egret flew over the house and down to the pond the afternoon. I took some (distant) photos just after he landed and saw that he was eating a large fish. I can't believe he caught this at the pond as he'd only just arrived. Most of the pond is still frozen over so I think he might have caught this fish down at the fish ponds and brought it up to us to eat in peace. There's still quite a lot of snow on the ground so he was almost impossible to see in all the white.

We've had yet another visit back to the UK so we've missed a few days in November.

It snowed heavily when we drove back from the airport earlier this week. Driving over the Ruhestein was quite scary.

Not a lot has been happening in the garden. Christine brought back this fine caterpillar she found while making Christmas wreaths with some of her friends. I think this is a Grey Pine Carpet. Nice pink thoracic legs!! Sadly, this is from Schönmünzach so I can't claim it as a new species for the garden.