The weather has been miserable all week and it seems like we've been in 24 hour twilight. Today was particularly awful with driving rain and grauple and gusty winds.

Despite the weather (or maybe because of it) the garden and surroundings have been alive with birds. We had a flock of around ten goldfinches with us for much of the day. We don't usually see so many and never this deep into December. No photos sadly as the perpetual dusk makes it too difficult.

I did snap a photo of a kingfisher down by the pond. He'd just scoffed a big fish before this photo was taken and he looks a lot happier than he did beforehand. A green woodpecker was searching for spiders on one of our sheds today.

November was the quietest month we've ever had since we started the diary. There were a lot of interesting birds from time-to-time including crested tits and goldcrests, but I never seemed to have the time to photograph them.

Today I resolved to spend a bit more time pointing my camera out of the window.

The highlight today was a couple of visits from a middle-spotted woodpecker. He spent all his time hidden behind branches so the photographs weren't very good.

Talking of photos which aren't very good, how about this heron? See how I've focused on the background! It could have been a good one, grrrr.

I've added some photos of hawfinches, bramblings and greenfinches as we're seeing these in great numbers at the moment. Late this afternoon, we had a coal tit. They're not uncommon round here and we hear them not far away all the time, but we haven't seen one in the garden for ages. 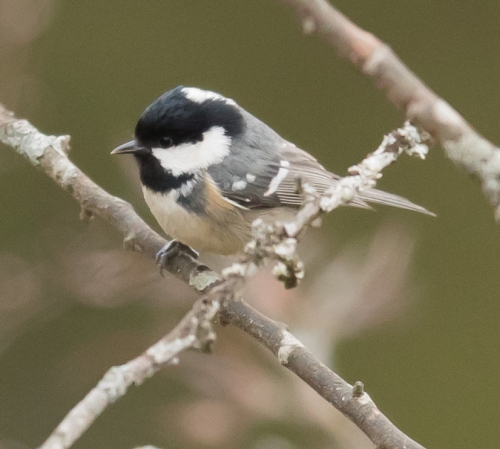