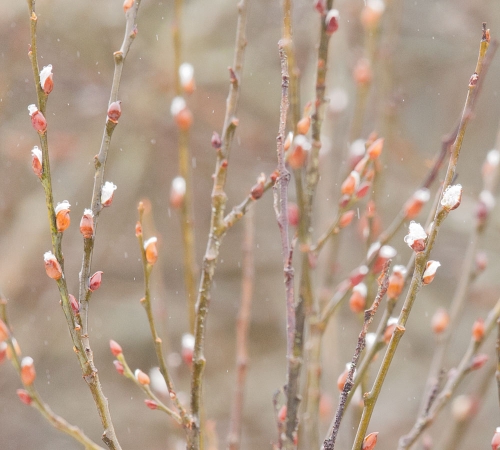 It was really miserable weather today. It started raining about 11 this morning and it is predicted to continue for a couple of days. It's still reasonably mild though; mild enough to go running in shorts this morning. And the willow in the garden is sprouting catkins.

On Wednesday, we had the first two siskins of the year in the garden along with a fine hawfinch. Today I got some pictures of a male siskin, along with a male brambling. The siskins don't seem to mind me sticking my camera out of the window, but the bramblings nearly always fly off straightaway. This brambling stayed a bit longer but resolutely stayed behind a twig.

There's still snow on the ground but it has been really mild and it is melting rapidly. 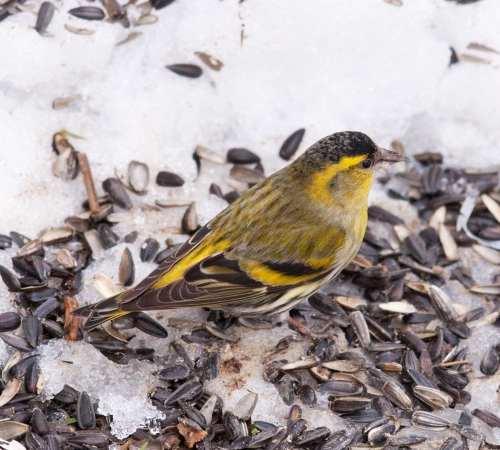 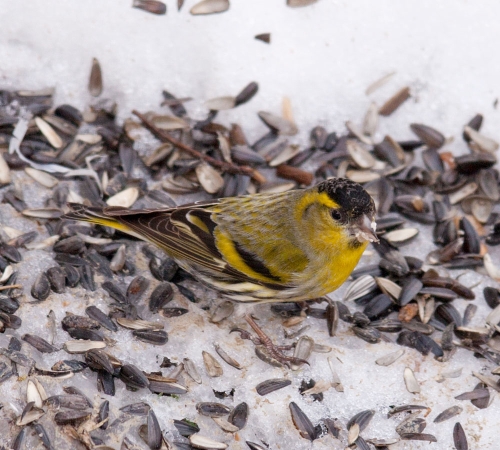 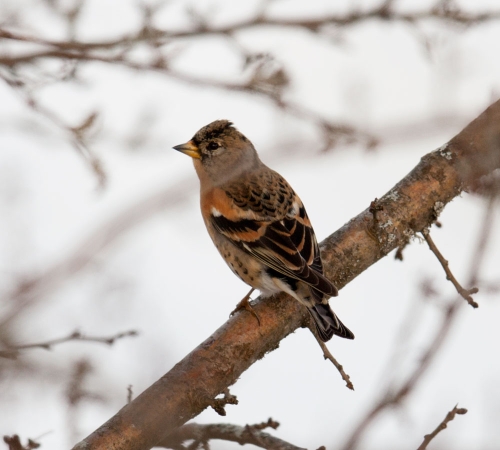 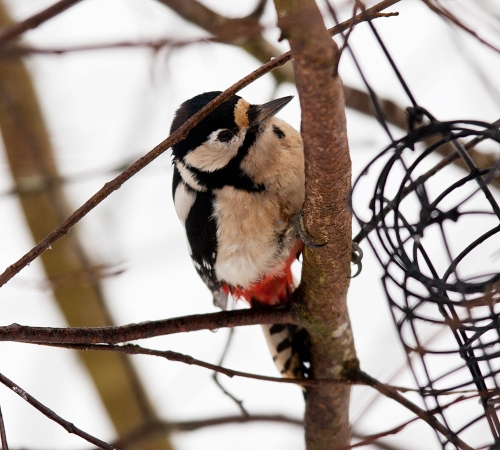 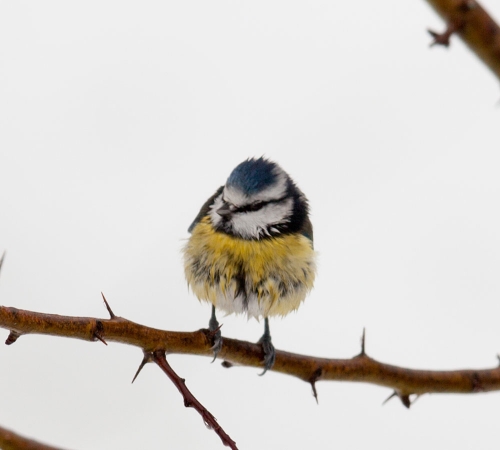 There was a bit of a thaw today, with temperatures reaching 4oC. The birds were singing like it was spring.

A female great spotted woodpecker visited the fatballs and stayed for quite a while this afternoon.

This blue tit looks like he's been playing in the snow! 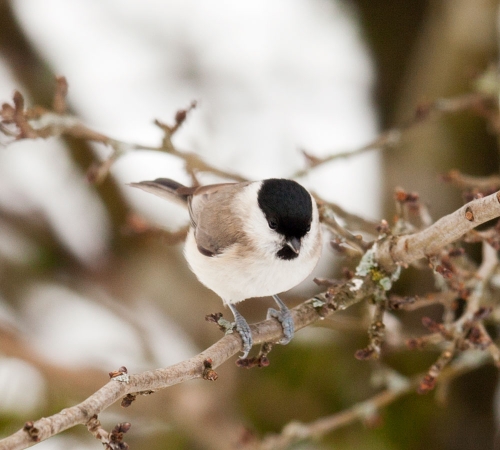 Last night there was Blitzeis, which is where rain falls on top of the snow and freezes. This makes the roads and pavements quite treacherous.

I took some photos of the regular birds, but the light was quite flat and there weren't any outstanding shots. This photo of a marsh tit will have to do.

I managed to get some photos of the squirrel that has lost half his tail. He looks otherwise healthy and he has quite an appetite for the sunflower seeds and peanuts. 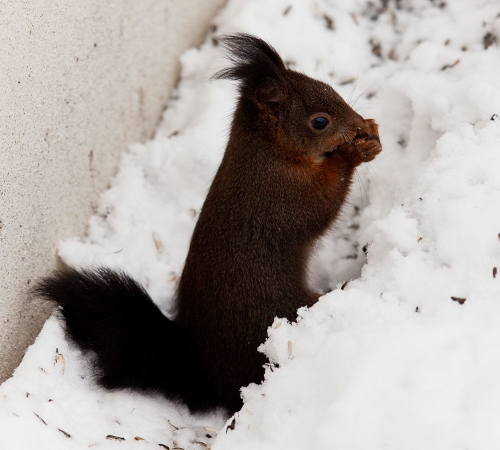 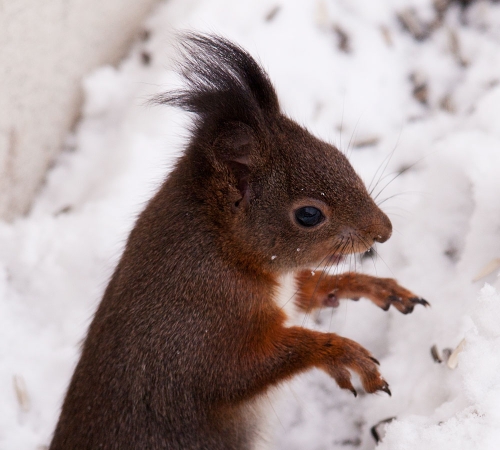 The snow continued today and we had quite a lot of shovelling to do this morning.

We briefly saw the kingfisher, but he did one loop of the frozen pond and flew off back towards the Forbach. We probably won't see him again for a while. 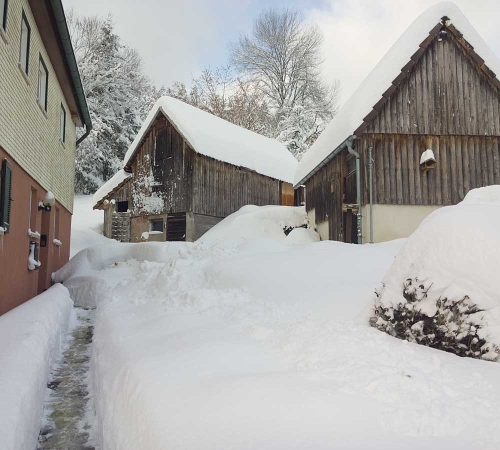 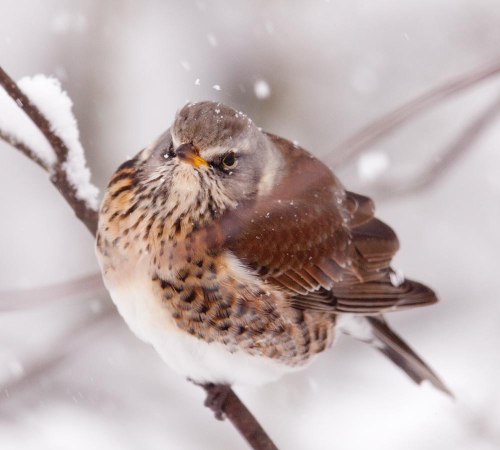 We had about 60cm of snow overnight and throughout the day.

This solitary fieldfare visited the garden but didn't seem to understand the concept of free food, so he just watched the other birds on the feeders for a while and then flew off. It's a pity he decided to perch behind a twig.

The squirrel that had the deformed tail (see 9th January) visited the garden again today without the manky bit of tail, so that has fallen off somewhere. He looks really strange with a very short tail. I tried to get a photo, but he ran off when I tried to open the window.

The weather reports suggest that it is going to be very stormy after today and it will also be, finally, getting colder.

These Great Cormorants seemed to know something was afoot as they flew over the house heading south. 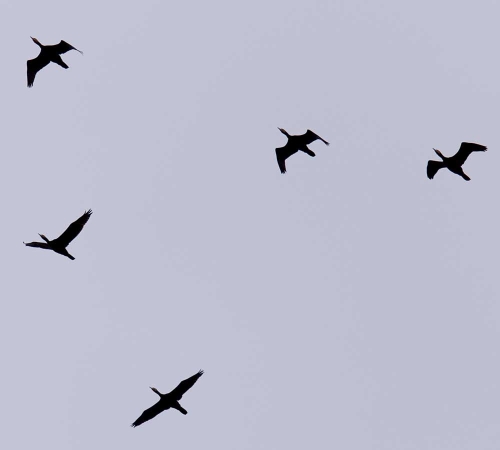 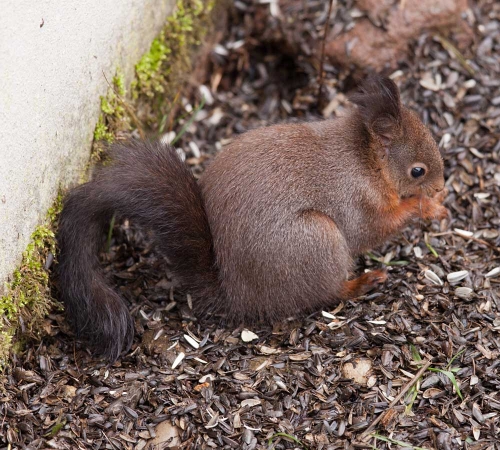 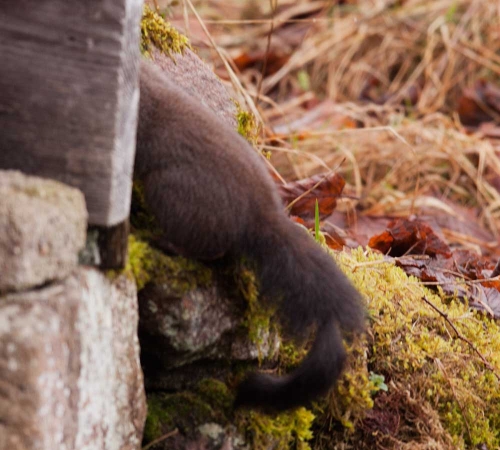 We've seen a lot of red squirrels this year. We can easily tell most of them apart as a number of them have unique features. There are at least two bright red ones, one with a full set of paws and one with a missing front paw (see December 2015 for a photo).

There are also two black ones: a normal one and this one with a strange tail deformity that makes it look like the end is about to drop off. You can see it better in the blurry photo of him disappearing behind one of our sheds.

It was the NABU winter bird count today and we had quite reasonable numbers of 13 species. 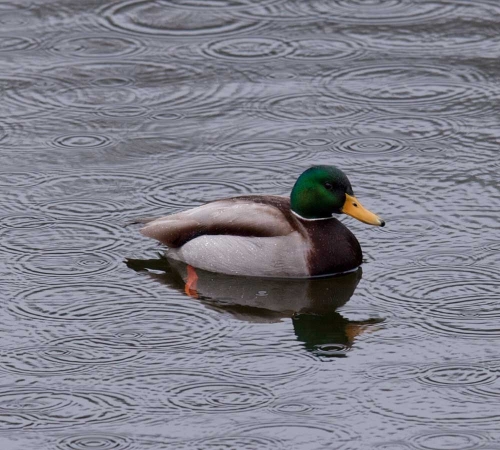 We haven't many water birds visit the pond this winter, but today a male mallard came for a brief time for a bit of swim in the rain.

We've only had house sparrows in the garden once before and that was on January 1st 2015, so we were a little surprised to see one in the garden today. We've come up with a theory that the New Year's Eve fireworks in town frighten them down into our nice quiet valley.

There seemed to be a very large number of birds around today. 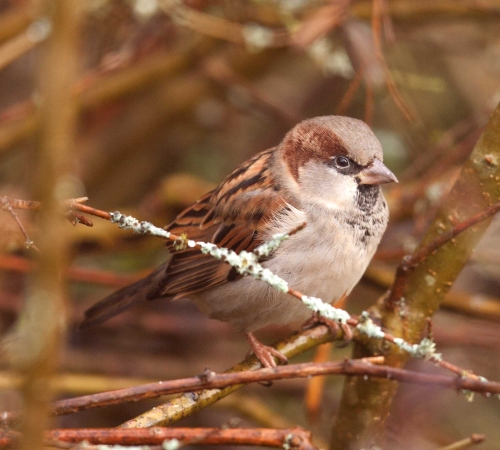