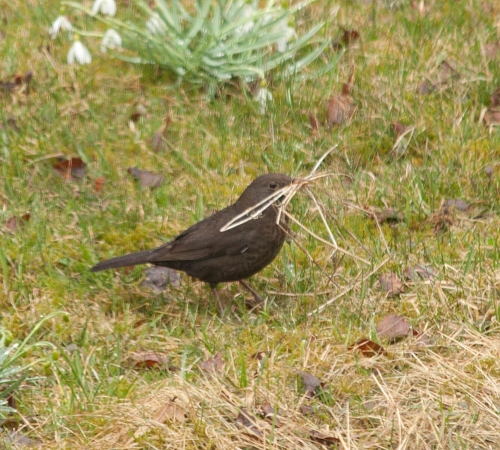 The weather has been terrible for the last couple of days - windy and rainy. It didn't stop this blackbird from gathering nesting material. She pulled out the long strands of grass from under our hedge and carefully folded them in her beak before flying into our yew tree.

I went to get the winter tyres on the car taken off and summer tyres put on. While I was out, the road into the valley had been blocked by a fallen tree, so I had to go round via the lower road. The road was covered in debris and fallen branches. 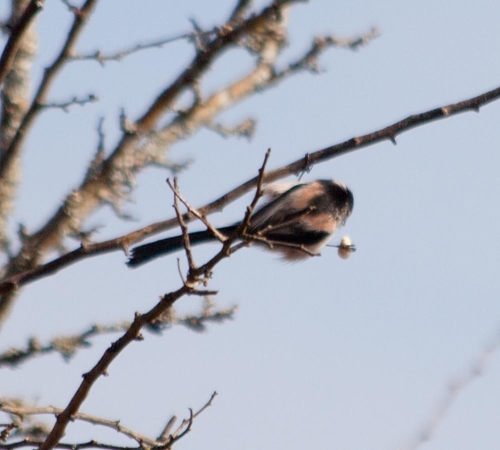 The long-tailed tits have developed a technique for eating the peanuts. They hang from a branch using one leg while holding the peanut in their other leg and pecking at it. It's only slightly more efficient than their other attempts and they drop plenty of nuts for the ground feeders to find. Here's a photo of the technique.

It was quite warm today when the cold wind subsided. In the afternoon, we saw the first few wood anemones of the year in flower - we're pretty sure they weren't out in the morning. We can also see the first few cuckoo flowers coming through in the garden and they'll be flowering soon by the look of things. 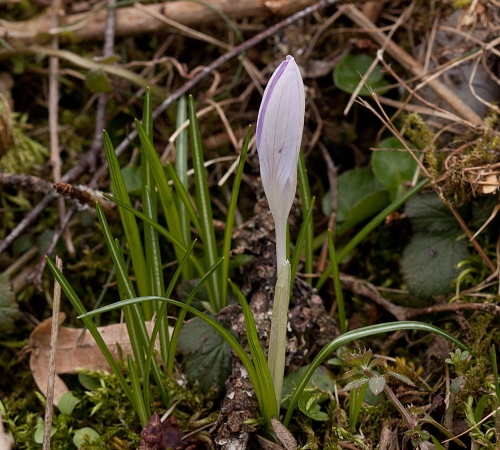 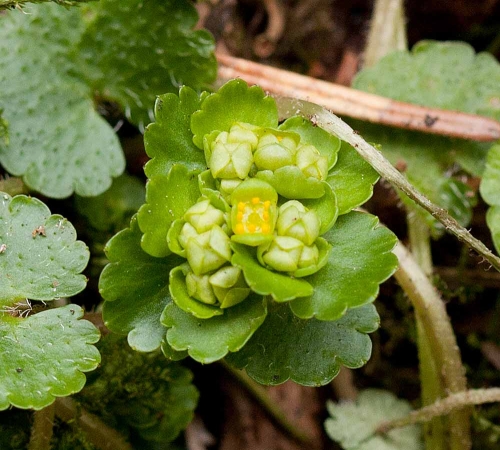 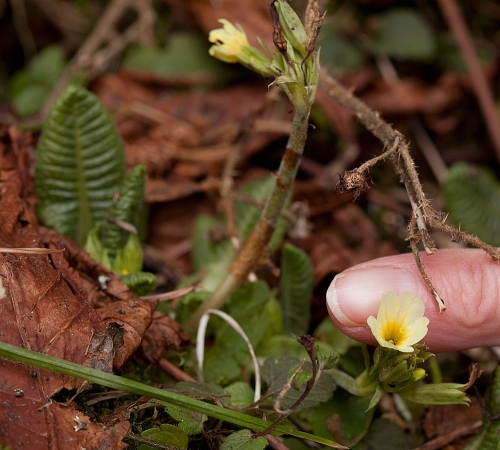 Today we walked out to take photos of the spring crocus and meadow buttercup flowering in the garden. We found Alternate-leaved Golden-saxifrage in flower behind the Bärenschlössle, several very small Oxlips (probably) and also the leaves of what I think is Kidney Saxifrage, which were very visible because the plants around haven't grown back yet. This does hybridise with St Patrick's Cabbage to form False St Patrick's Cabbage, however.

We were pleased to see two long-tailed tits today. It is sad that we lost one yesterday but the other is now no longer alone.

There were fewer frogs on the Talstrasse today as it is quite a bit colder and less sunny. 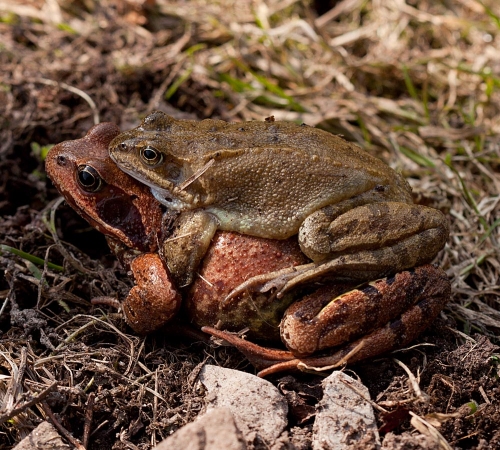 Unfortunately, we lost one of our pair of long-tailed tits today - it must have been caught by a local cat. We found the feathers on the grass. Luckily, our cat is not interested in the birds. The other tit kept coming but is now alone. Very sad.

We walked down to the fishponds to see if there were any frogs crossing. There are already a large number who have reached the ponds and are making a wonderful noise. We carried about 10 across the road.

On the way back we saw a red kite and later he came to the lake and was being chased off by three crows. He was probably looking for the frogs too. 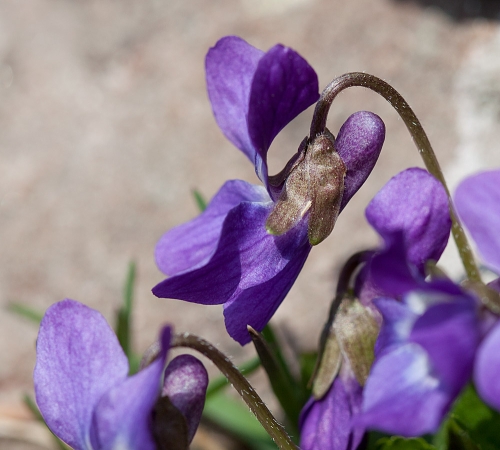 Out on a run today, we spotted Lesser Celandine, Snowdrops and what I have since confirmed to be Sweet Violet (Viola odorata) all flowering in the dry stone wall at the pump station. The violet is more often found on chalky soils, so it surprised me at first but it may be a garden escapee. It had a wonderful perfume.

There were also around 10 frogs crossing the Talstrasse later in the morning as the day got warmer.

An experimental light-field photo of the snowdrops in our garden. Click on any part of the image to switch focus to that part or click the icon at the bottom right to put everything into focus. ** This doesn't work in Safari **

There were several frogs basking in the sun on the Talstrasse. I moved them to the river side of the road so that they would not get run over. They felt very cold so they had probably only just emerged.

We also had the first flowering Lesser Celandine plants in the front garden. 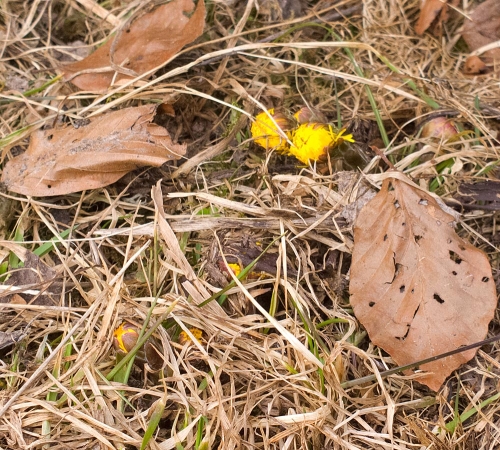 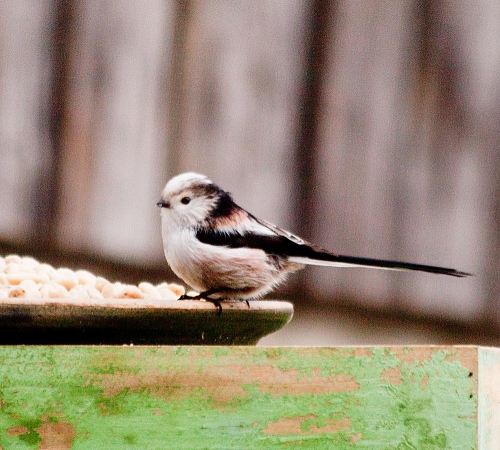 This morning there was quite a fight between a raven and two crows over the house. The crows were obviously trying to get the raven to stay away.

We went out for a run over the Finkenberg and noticed the first Coltsfoot plants flowering. It was quite sunny but still chilly as the wind was colder.

Two long-tailed tits have come to the table regularly for the past two days. They can't quite cope with the large size of the peanuts but are trying out different strategies to get to grips with them. One of the birds takes the nut down to the snow and holds it with his feet as he pecks it. The Great and Coal tits are able to carry the peanuts more easily and hold them while standing on a branch.

Our lower bird box is being visited by a blue tit quite regularly, who seems to peck at the rim of the entrance. We haven't seen him take any nesting material in but today a second blue tit visited the plum tree at the same time as he did. Perhaps they are starting to pair up. 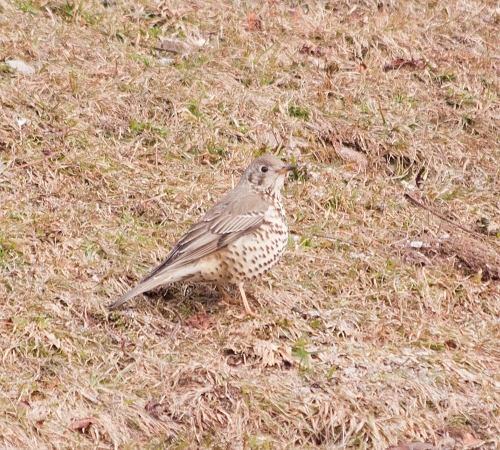 We drove up to the Ruhestein Nature Centre to join a walk about animal winter survival strategies. We noticed large flocks of birds crossing the road from the south west at several points and were later told that there are a lot of returning migrants using the shelter on the high moor as a stopping and refuelling point. We had noticed greater numbers of chaffinches, hawfinches, greenfinches and bramblings in our garden this week, so this may explain why.

Unfortunately, crossbills also take salt from the same road and they are being run over in quite large numbers.

There were several mistle thrushes near the lake today. There are also celandine leaves coming up everywhere.

We have recently noticed several carrion crows flying overhead with branches in their beaks which they seem to be collecting from the poplar on the hill. 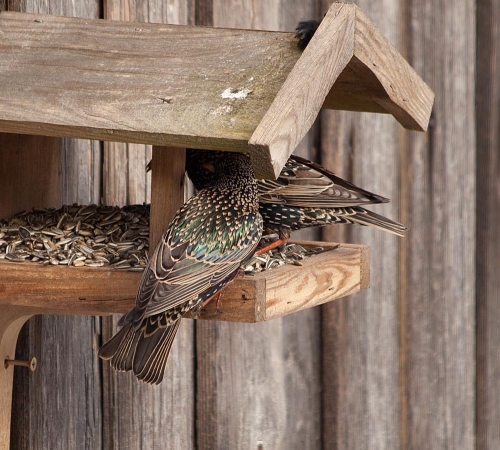 Yesterday I thought I had seen a starling in the garden and today this was confirmed when two appeared at the table briefly. It seems strange to be getting excited about seeing starlings, but these really are extremely rare visitors to our garden. There are still siskins about but far fewer than last week.

The ice on the lake has finally melted today and the mallards were about again.

The butterflies really started flying today and were visiting the snowdrops. We saw small tortoiseshells, a red admiral, a peacock and a brimstone in the garden. There were also hoverflies and bees about. It was not surprising as the temperature reached 21oC on the patio. The first daisy has appeared on the path behind the house.

We noticed in the morning that there were no siskins and later only two appeared. They may be preparing to move North. We did have four hawfinches to compensate, though. It was cold overnight but by mid-morning the sunshine had made things very mild and there was a noticeable warm wind coming down the valley.

We've been noticing a strange bird call coming from the Finkenberg - we heard it last year too. We'd presumed it was a carrion crow as we'd seen them at the same time as we'd heard the call. Today we identified the call as being from a raven using an app on my phone.

It was really warm and sunny today. The temperature reached 21oC and we were able to have lunch on the patio. I saw a twenty-plume moth, but no other lepidoptera seemed to be out.

This morning we went for a run along the railway to the Friedrichstal viaduct. We saw some honey bees flying near some hives. 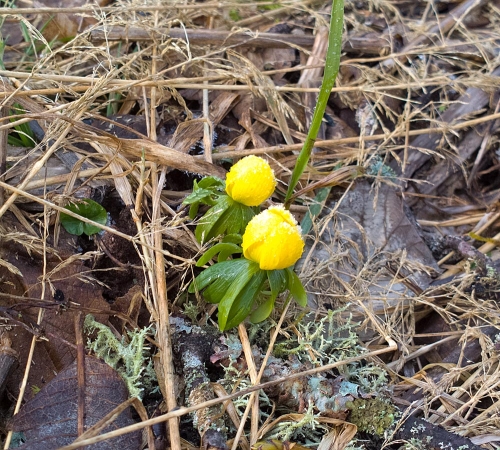 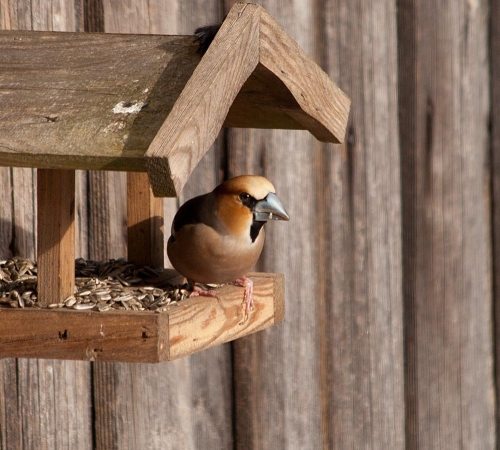 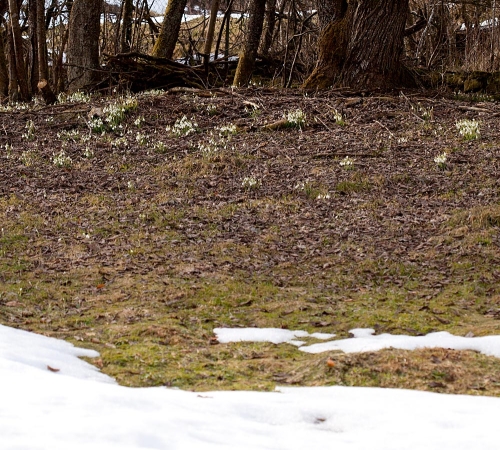 It was a lovely sunny day today and we used the nice weather to clear a few of the broken trees in the garden.

We saw some winter aconites flowering on Talstrasse and also in town on the lower market square near the sequoia.

I got some photos of the flowering field speedwell and snowdrops peeking through the receding snow.

Finally, there's a nice picture of a male hawfinch showing his handsome grey/blue breeding beak. If you look at the photos of hawfinches in February, you can see that their beaks were pink back then.