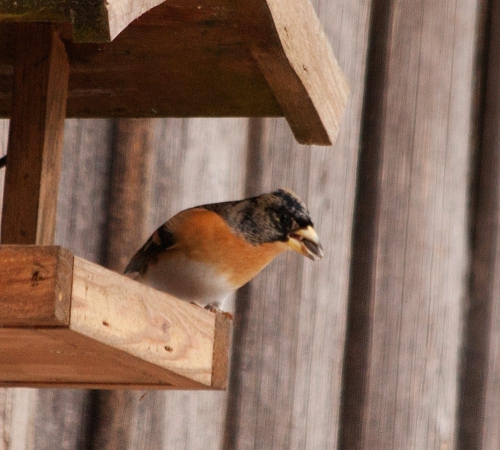 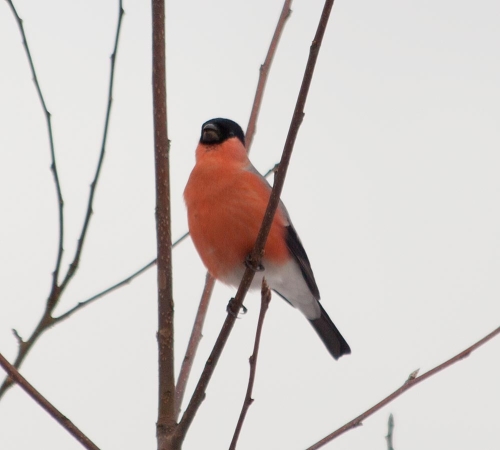 Yesterday, we had our first couple of siskins of this winter. Unfortunately, I didn't have a chance to get a photo.

Today, we had a lot of birds coming to the table. At one stage, there were 6 bullfinches, 4 hawfinches and a small flock of about 10 bramblings.

I'm pretty sure the numbers are going up due to the prolonged spell of cold weather we're having. News of our endless supply of sunflower seeds and peanuts is spreading. 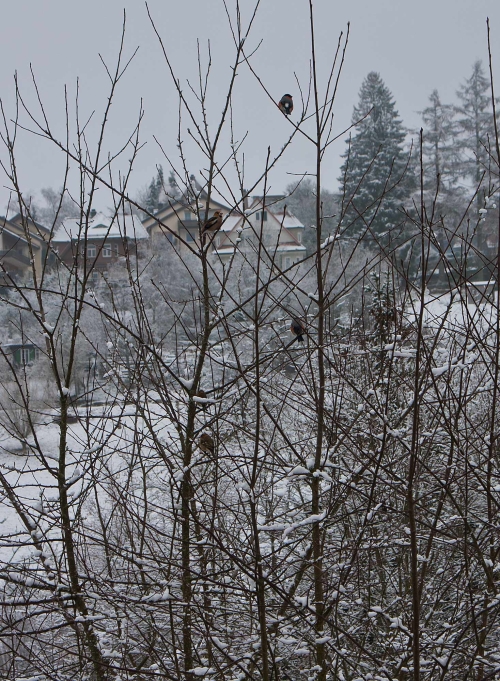 We had five bullfinches today - four male and one female, who was boss at the bird table. She flew off when a hawfinch came, though. It was quite a day for finches and this photo has a nice selection. 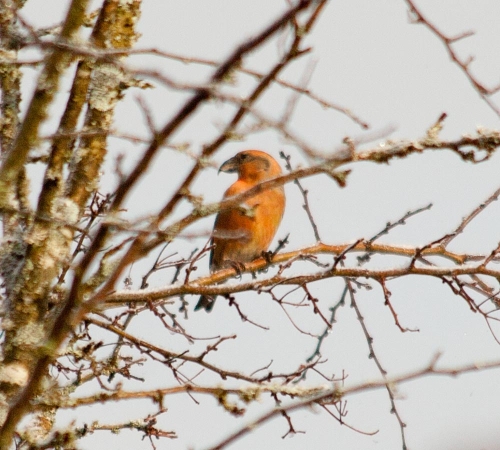 This morning we saw our 57th garden bird species, the 58th for Christophstal - a beautiful male Common Crossbill. 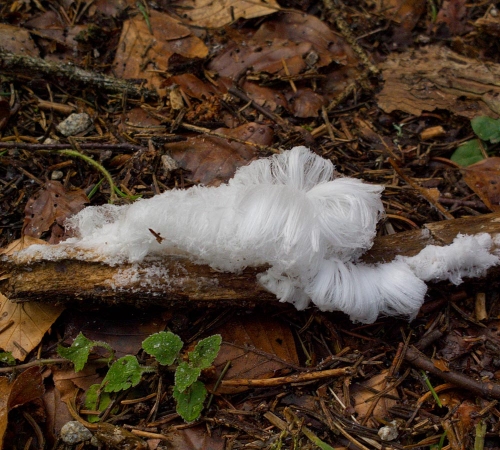 We saw frost fungus again today while running up the Finkenberg. Up until now, I've had trouble photographing this as camera phones aren't very good at exposure when there's a bright object with a dark background. No problems with my Nokia 1020 though - shooting in raw, I dropped the exposure 2 stops - pulling it back slightly in Camera Raw - and got the photo I wanted.

There were also a lot of areas which had been freshly dug at the side of the path. It looked like the work of wild boar (or could deer do the same?) and there must have been several animals looking for roots to eat. 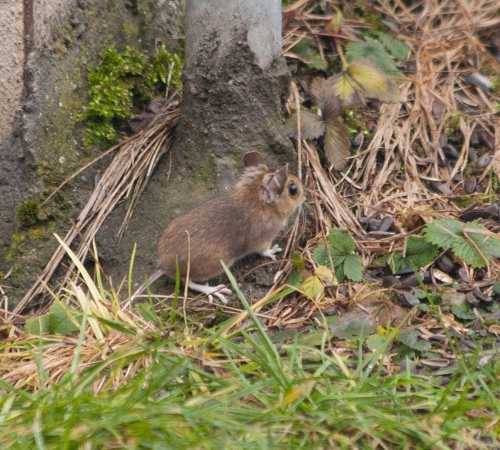 We spotted a mouse (either a wood mouse or a yellow-necked mouse) coming out of the shed this morning. It picks up the sunflower seeds and rushes back inside. It is rather wet weather alternating between rain and sleet today but we have had a lot of different birds, with a hawfinch visiting the garden too.

While I was out on a run down the valley today, a red squirrel ran across the path in front of me. He looked very well fed and his tail was in very good condition. He was a beautiful bright orange colour, so obviously not all red squirrels carry a darker coat at this time of year. Perhaps it's due to the milder winter we've had. 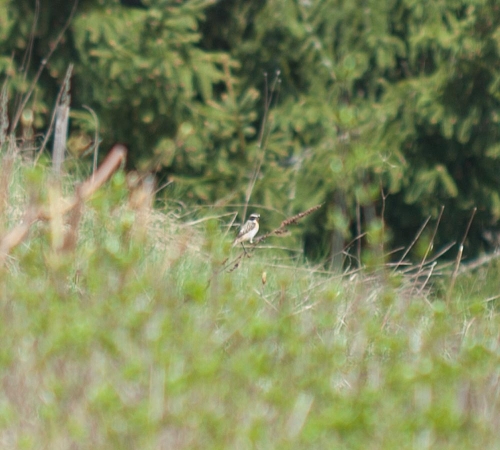 We spent an hour counting the birds in the garden for the NABU winter survey this morning and got 11 species. It was very busy. There were three bullfinches and we also saw three hawfinches on the road near the hornbeams.

It snowed for most of the day today, but this was what they call 'Graupel' here - a soft hail.

Yesterday, we spent some time sorting out some IDs and classifications on the website. Dr. Dietz, a local expert who counts the bats in the valley regularly, managed to identify the bat we'd photographed on one of our window-shutters back in April 2013 as a Daubenton's bat.

While classifying the bird species, I thought I'd re-check the Northern Wheatear ID I'd made from a photo in April this year. It looked wrong, so I looked again at the photos I had and have now confirmed that this was, in fact, a Whinchat. This is a really nice species to record - it is classed as "Threatened With Extinction" in this area. The photo I've included here is more diagnostic than the one currently shown on the species list. 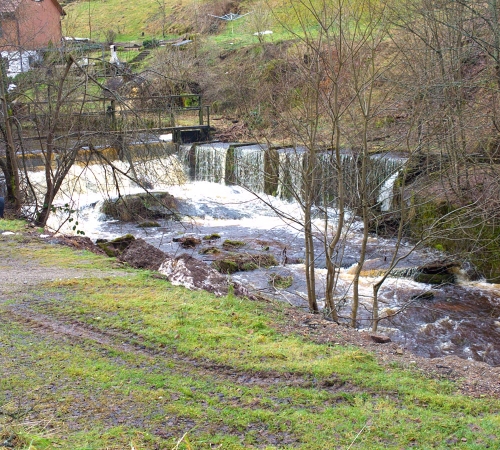 Meltwater in the Forbach, Christophstal January 2015

The heavy rain and wind overnight has melted the rest of the snow. On the way into town, we saw how high the river was with all the meltwater.

We woke up to find that some animal, probably a fox, had torn open all of the rubbish bags we had put out last night. He won't have found anything, as it was the plastics recycling, and we had to collect it all up and bag it again.

The bird table is very busy. This weekend is the NABU National Winter Garden Bird Count, so we want to count the birds tomorrow.

It has rained for most of the day and we had quite strong winds, which is quite unusual here. The snow has almost gone.

The snow is melting away and temperatures have been up to 4oC. More snow is forecast for the weekend, though. There was a bullfinch at the bird table today.

It was very cold last night and we saw a fox running quickly past the lake and down towards the river. We had -7oC near the house this morning. We found a lot of tracks in the garden over the weekend so we set up the wildlife camera but the lens froze over so we just got white pictures. We were, however, glad to see a male bullfinch at the table during the morning. 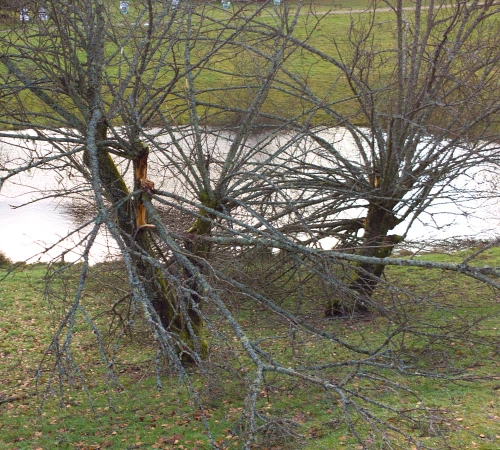 It rained quite heavily on Friday and yesterday and the snow has really melted back. There are a lot of fallen branches everywhere as a result of the heavy snow last week. 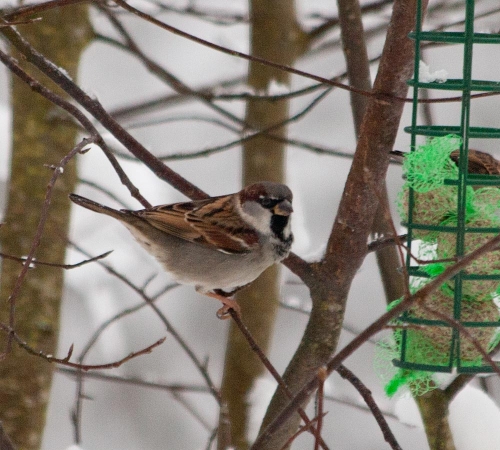 Early this morning we had a small flock of about 10 House Sparrows around the fat balls. Surprisingly, this is the first time we've seen sparrows in the garden, so this becomes the 56th species of bird we've recorded from the house. Of the 57 species of bird on our species list, only the White-throated Dipper hasn't been seen from the house - we've only seen that species down on the Forbach, about 100 metres away. It was there again today.