Once again, the crested tit visited the garden and again he was too flighty to photograph. The light was terrible anyway. After some initial heavy snowfall this morning, the temperature rose steadily during the day and it was raining heavily from midday onwards. The snow is still on the ground, but it is very slushy. 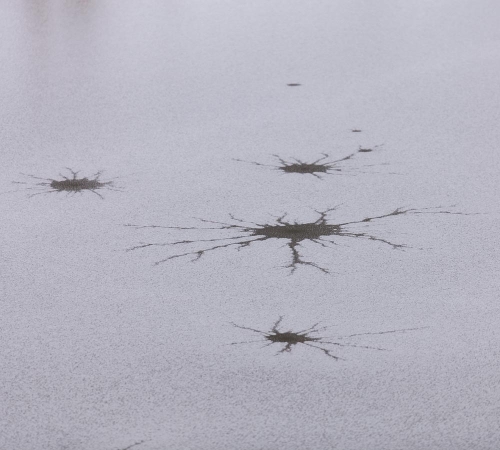 It's been really cold all week and it was down to -9oC on Wednesday night. The pond has frozen over, but as it warmed up today, this interesting pattern of holes was created.

It started getting dark around 16:30, but it was just light enough to see the first crested tit of this winter hopping around in the garden. Hopefully, he'll visit for the next few days and I'll be able to get a photo. In the meantime, here is a photo of a little chap from last year. 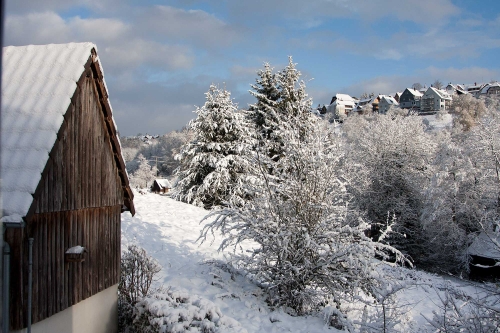 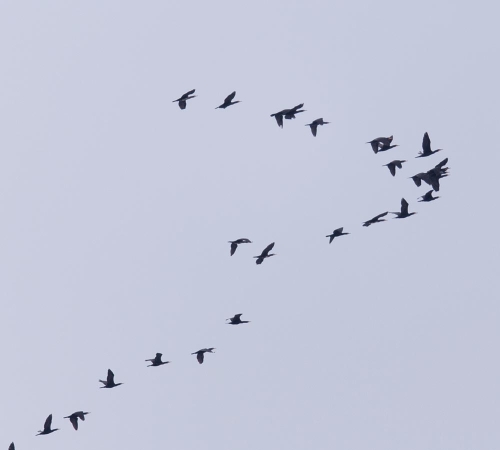 It continued to snow overnight and we reckon there was about 5cm on the ground this morning.

Just after lunch, a flock of around 50 great cormorants flew over the valley eastwards. This becomes the 70th bird species seen from the house. 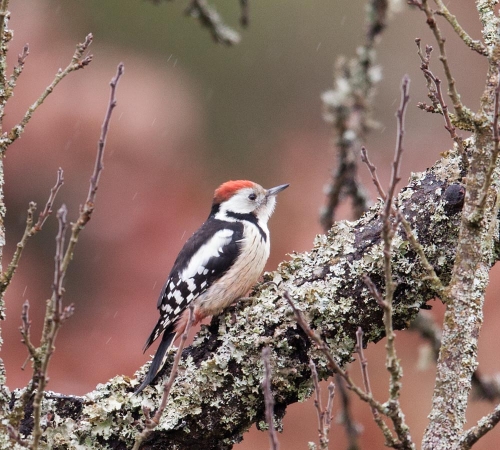 This morning, a middle spotted woodpecker visited the peanut table and took his peanut into the mirabelle tree. I'd previously identified this as a great spotted woodpecker. Looking back over my photos, I found that this wasn't the first time I'd made this misidentification. This was actually a new species for the garden back at the beginning of September and he's been visiting fairly regularly since then.

In early afternoon it started to snow heavily.

A more regular visitor to the peanut table is this jay with strange side-projection. We're not sure if he's got an abnormal growth or he's just got some displaced feathers, but he has been like this for several months and is one of the greediest jays we see.

It rained heavily for 24 hours. The pond, which was previously at the lowest level of water we've seen, is now right back up to full again.

The spring that feeds the pond and which has been dry since August is now running again. 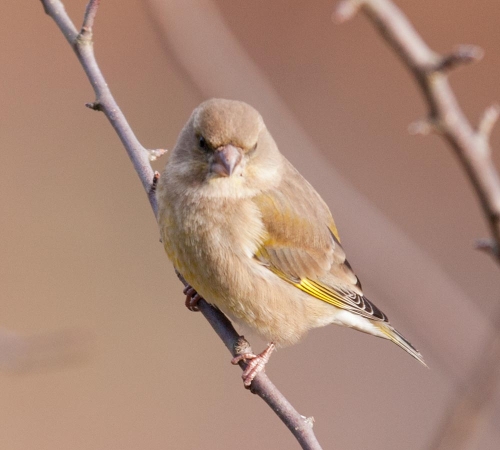 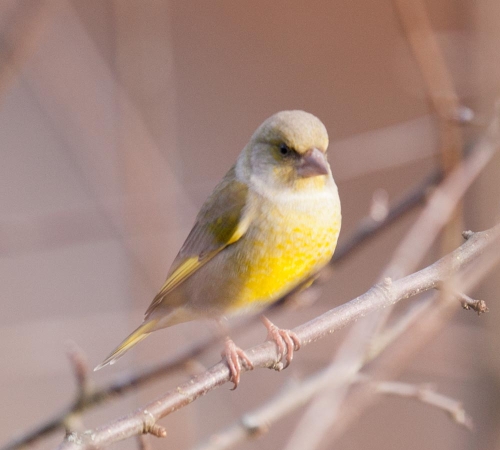 Once again, there wasn't a lot going on today. We had a visit from a flock of mixed birds: chaffinches, bramblings and greenfinches.

It's been windy all day and a couple of ravens treated us to a ballet. They seemed to be enjoying getting buffeted by the wind and were doing a lot of stunts together. The image here is a composite of two images. Unfortunately, they're a bit distant. It's been a quiet week. The weather changed last night and was wet and windy. This morning is much fresher.

This afternoon, I was enjoying watching a blackbird fluttering about in the garden. He eventually flew off over the pond into some cover. Unfortunately, a sparrowhawk spotted him and managed to flush him and another bird out. I wasn't sure what the other bird was, but I saw the blackbird fly panic-stricken down the valley with the sparrowhawk in close pursuit. It's doubtful he got away.

Immediately after this, we saw a middle spotted woodpecker clinging to our peanut feeder. He clearly wasn't happy and stayed motionless on the feeder for quite a while. It looks like this was the other bird. Perhaps the blackbird saved the woodpecker. 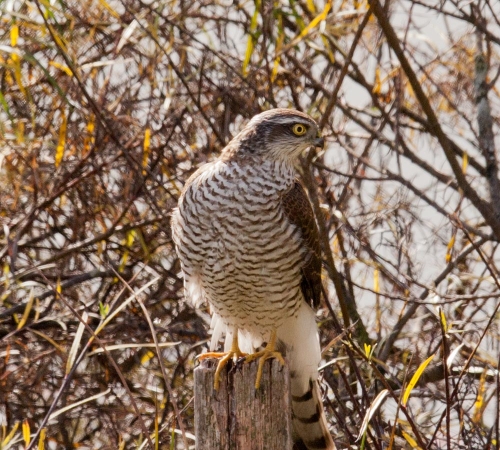 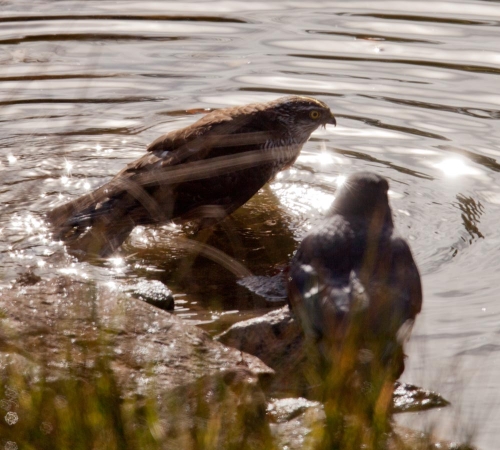 A sparrowhawk was bathing at the pond this morning, watched closely by a crow. Afterwards, it sat in the sun drying itself. 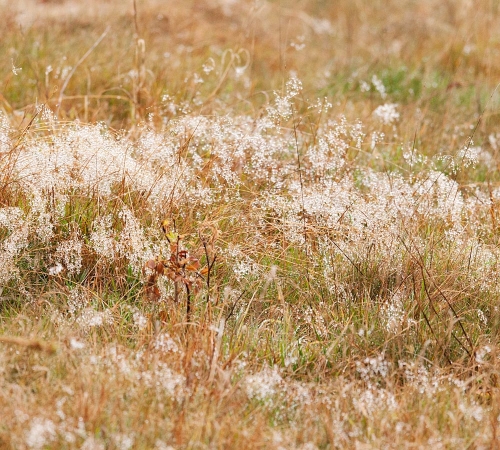 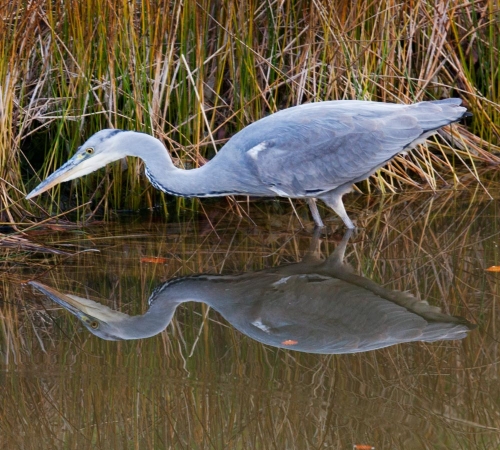 It was drizzly this morning which created this interesting effect on the Harrerbuckel.

A buzzard spent several hours across the valley drying his wings. It would have been quicker if he'd sat in the sun rather than in the shade.

This hunting heron created an interesting shape with its reflection. It continues to be extremely mild and dry. We've seen 26oC on the patio this week.

This morning and evening we had some large flocks of black birds flying through the valley. I think they're carrion crows, but they were silent, which is unusual.

** UPDATE ** They're probably jackdaws as some large flocks have been observed nearby. There were more flocks of fieldfare flying through the valley today. This time, they stopped off for a while in the hornbeams. 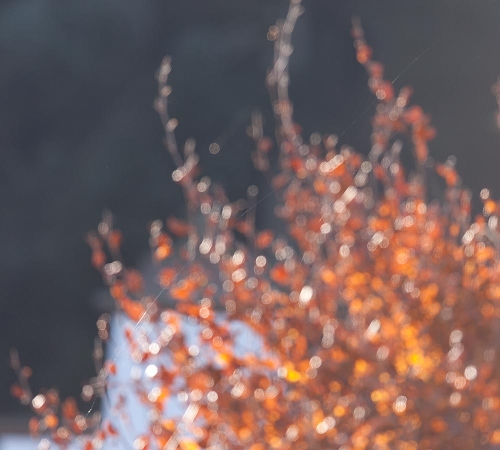 We briefly had a sparrowhawk in the garden this morning. Luckily, it didn't catch any of the birds at our feeders and three crows chased it away. The crows stayed around for a while to make sure he didn't come back.

This afternoon, when the sun was low, we could see some really long threads of silk flying across the valley. Some of them were several metres long. This photo was an attempt to capture this, but it's difficult to see. Presumably these were spiders distributing themselves. 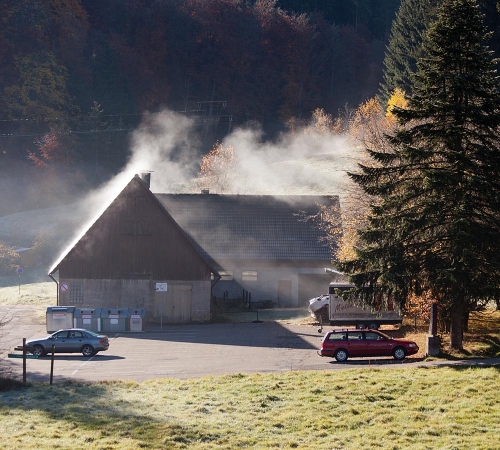 It continues to be cold overnight and extremely mild in the day. This results in the steamy scenes like those shown here from this morning.