The thermometer read -9.1oC this morning and the pond has frozen over for the first time this winter. It continues to be really quiet in the garden. If it wasn't for the crested tits, there'd be nothing to see at the moment. This one is getting braver and was happy to have me take photographs while it visited our makeshift birdtable.

We saw a large flock of birds (probably 200+ maybe siskins) in the woods this afternoon but they didn't come to the garden. We also saw lots of hawfinches in the hornbeams but they stayed out of the garden too.

Back on the 22nd October, we showed a picture of a caterpillar we'd found on a lettuce we'd got from a local supermarket. Today the moth emerged and, as predicted, it was a Scarce Bordered Straw moth. This also has an alternative English name - the Old World Bollworm - which indicates its status as a known pest of foodstuffs.

Here, I've taken some photos from various angles some of which show its impressive green eyes. The predicted storm did not happen - in fact it was a lovely day - it got to 16oC on the patio. We continue to have regular visits from one or more crested tits.

There were also lots of hawfinches around but we didn't see any come to the garden.

This female great spotted woodpecker was around a lot today too.

There's a big storm brewing for tomorrow and, although the main part is due to miss us, there were a lot of crows and ravens wheeling about in the sky today as if they're expecting the bad weather.

A great white egret landed in the valley briefly today. We've had one before outside the house, but this was the first time I've managed to get some photos. My previous photos were all taken down by the fish ponds. It's very difficult to get the exposure right on this bird. If I'd have had more time I'd have dropped the exposure down a bit to prevent the harsh edges.

This is such a rare visitor, it gets the honour of five photos. There's very little going on in the garden at the moment. The highlight of the weekend was the regular visits of two crested tits - the first time we've seen more than one at a time. As usual, this one decided to sit behind a branch so this was the best photo I got. We had the first snow of the year today. It was cold but it snowed and melted several times during the day.

There was heavy rain all day today. Snow is predicted for the next few days so there were lots of bird in the garden today stocking up for the hard times ahead.

I've seen a firecrest for the last few days and finally, today, she came out into the open for me to take some photos. They're not the best as the light was poor. 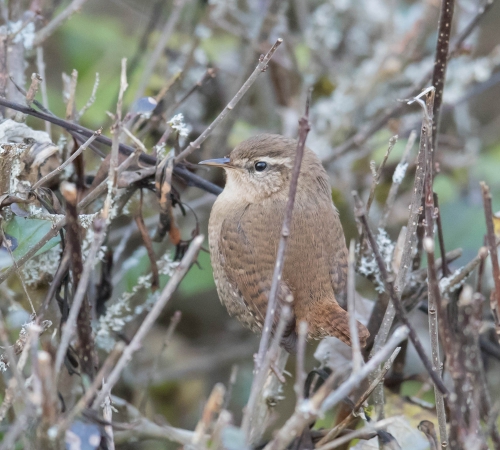 It was another public holiday in Germany and it was sunny and warm too. As I'm going down with a cold and Christine is still recovering from hers, we spent the day indoors and I photographed what little bird activity there was.

The treecreeper was back and I managed to get a photo of him with a spider.

The wren is still a regular visitor too, but I never seem to have my camera around when he is out of the shadows. This photo is a bit grainy.

There was a large flock of carrion crows over Freudenstadt. I estimate there were around one hundred birds.

There were a lot of buzzards around as well and this kestrel came quite close to the house.

Lastly, I've included a photo of the mushrooms from Friday showing how they've 'developed'.