The cows have now been moved over to the other side of the valley.

The trampled ground left behind is allowing lots of birds to feed on the small froglets which must be just leaving the pond. We've had a few on our driveway and patio.

There were three herons, a parliament of crows, a buzzard and a red kite all flying over or hopping about in the field today. 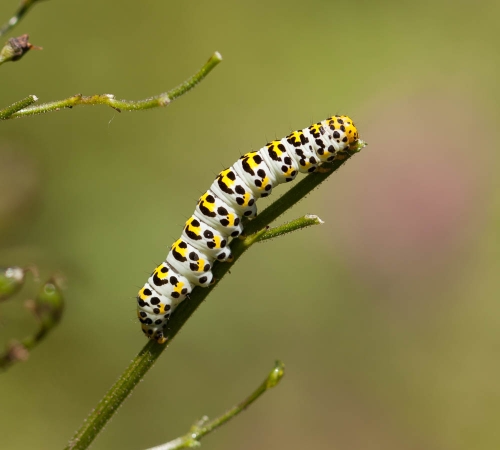 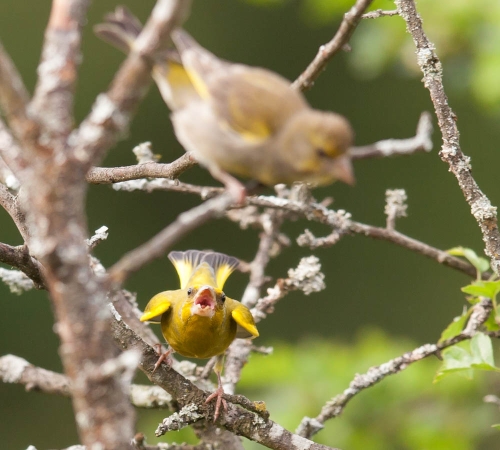 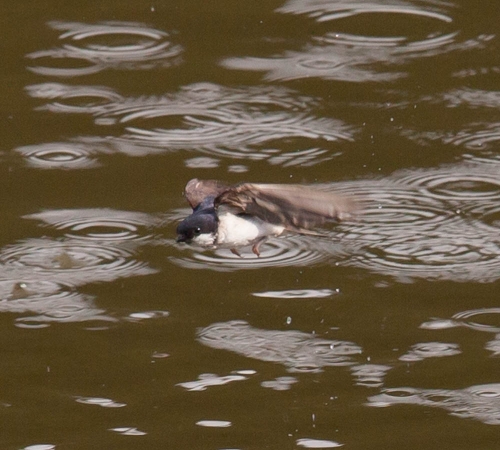 We went for a walk up the Finkenberg. There were some nice butterflies and moths about including a scarlet tiger moth and silver-washed and high brown fritillary butterflies. We also saw this impressive mullein moth caterpillar feeding on figwort.

Back at home in the afternoon we watched this belligerent greenfinch trying to provoke another greenfinch who wasn't having any of it.

I had another go at photographing the house martins drinking from the pond. I got this one which is one of my better ones. 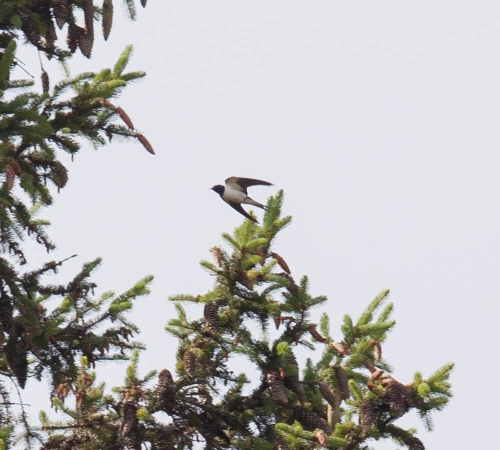 There have been a number of red-backed shrikes around all week. Today, this male sat in the hawthorn and I managed to catch him yawning or burping.

There were a lot of swifts, swallows and house martins around in the afternoon and I had a go at getting some 'bird-in-flight' photos. These species are extremely fast moving and I've yet to master the technique for capturing them up close and in flight. I did get a couple of a swallow that were distant, but in focus.

It has been difficult to find time to watch the garden these past few weeks. We've been recording the birds we see in the garden every day for the past three years. During that time, we've seen three species of bird every single day; Blue Tit, Great Tit and Jay. Yesterday, we didn't see a blue tit for the first time. This is probably more that we didn't have the time to watch rather than there being no blue tits.

In contrast, today we saw a kingfisher for the first time since January 16th.

The cows have also brought their horseflies along and an assortment of birds like white wagtails and grey wagtails which eat the horseflies and dung beetles.

After spotting a false heath fritillary a few days ago, but sadly out of the garden, I was pleased to spot one in the garden today nectaring on the marjoram. The marjoram has been a real hit this year and is almost always buzzing with bees and butterflies.

Towards the evening the fences went up and we knew the cows were coming so we went up to our meadow to collect the spignel seeds before they got eaten. Sure enough, the cows arrived just as the light began to fade. 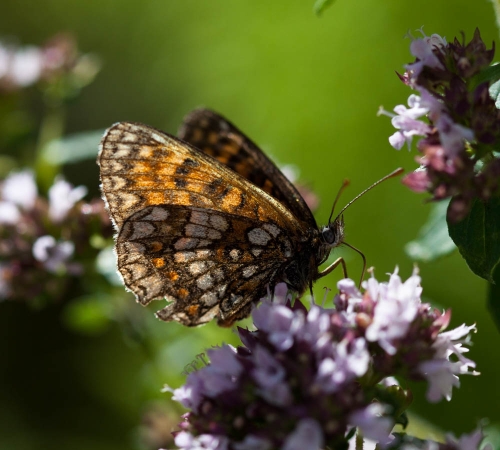 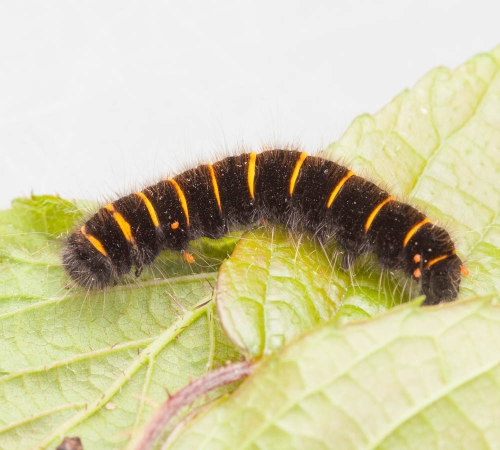 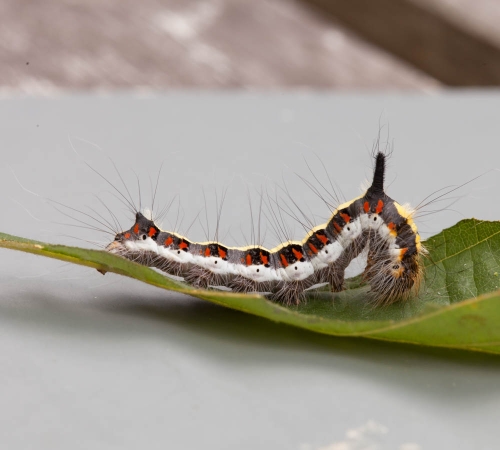 This morning we went for a cycle ride to Buhlbachsee. The last climb up to the lake was really tough.

We picked up this young fox moth caterpillar on the cycle path just outside Mitteltal. He seems to have a few mites attached. I tried to get them off, but he thrashes around so I've left them for now. I don't think they'll do him too much harm. If I can think of another way to get them off, I'll try later.

We had an icecream in Baiersbronn and sat in the Rosenplatz watching some kestrels that had nested under the eaves of one of the houses backing onto the square.

Later on, while admiring the hazel nuts developing on the hazel in the garden, I spotted this grey dagger caterpillar. It's always nice to find these as the adult moth cannot be distinguished from the dark dagger but the caterpillars are quite different. If I can breed this one through, I can get a photo of the adult with a positive ID.

It was another warm day. There are a lot of butterflies flying at the moment including skippers, marbled whites, black-veined whites, ringlets and meadow browns.

It was nice to have this purple emperor land on the patio. We've seen one every year we've been here, but only one at a time.

In the afternoon, we went up to our meadow to see how our broad-leaved helleborines have got on. We placed fences around them earlier in the year to stop the deer or hares eating them off like they did last year. This seems to have worked as two were in full flower and one was about to flower.

It seems that the meadow has really benefited from the late arrival of the grazing cows this and last year. There are lots of harebells, scabious, knapweed and tufted vetch flowers. Also the spignel has produced a lot of seed for the first time.

While admiring all the butterflies enjoying the flowers, I spotted what I thought was a heath fritillary. Nice, but we see quite a few of those. I took some photos anyway as it was quite a dark specimen. On close examination of the photos, this one turned out to be a false heath fritillary, Melitaea diamina. There aren't many recent records of this species nearby. 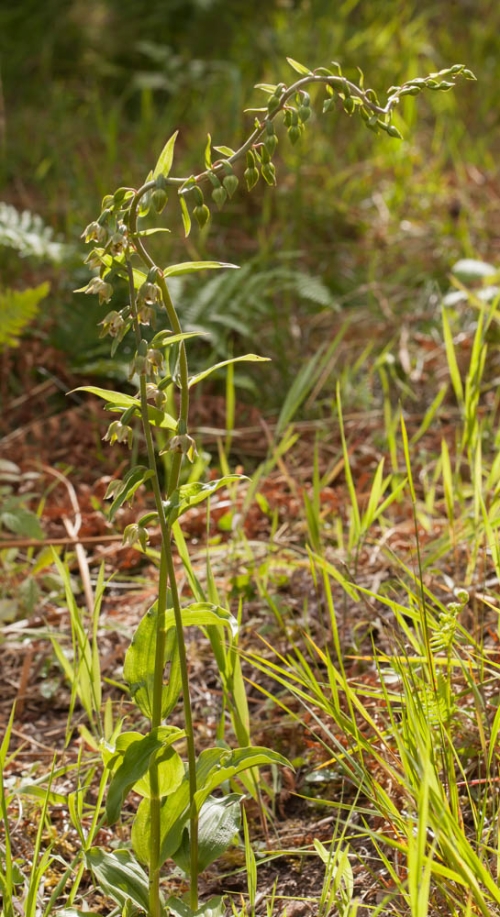 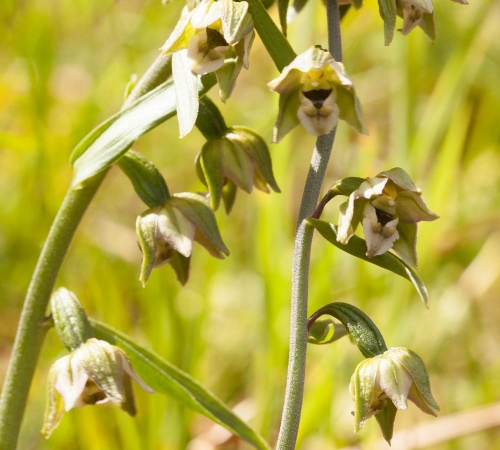 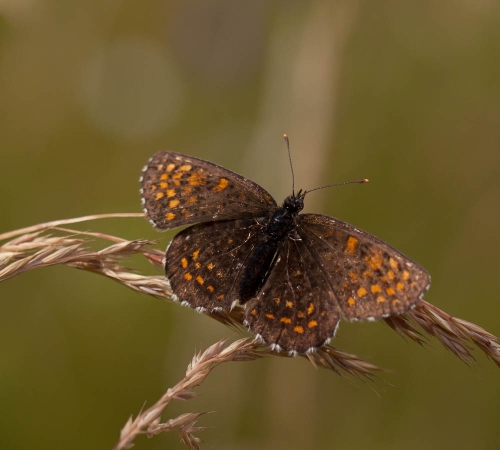 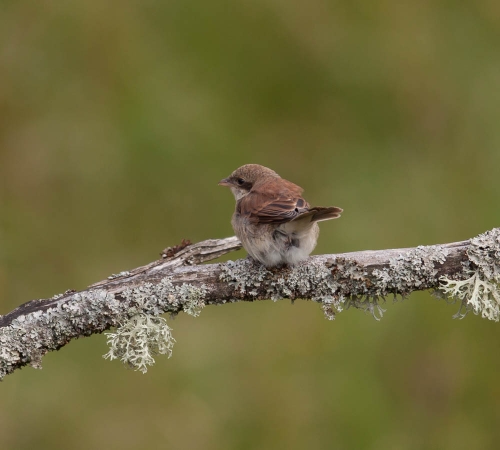 The red-backed shrike family are still around (or it might be a different one). The fledgling came into the garden today and I only just managed to get this single photo before it flew off.

We're finally seeing some regular visits from red-backed shrikes. There was an adult male and female around today with a single fledgling. This photo shows the female with the fledgling below. 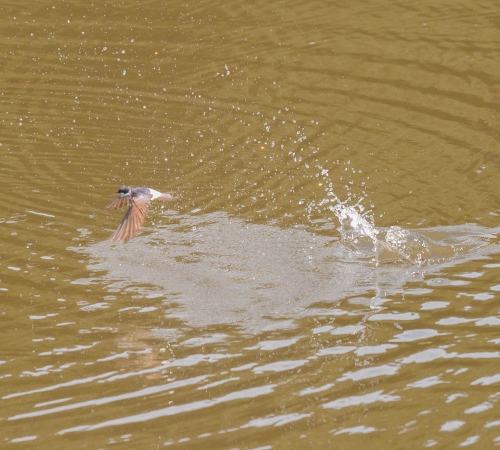 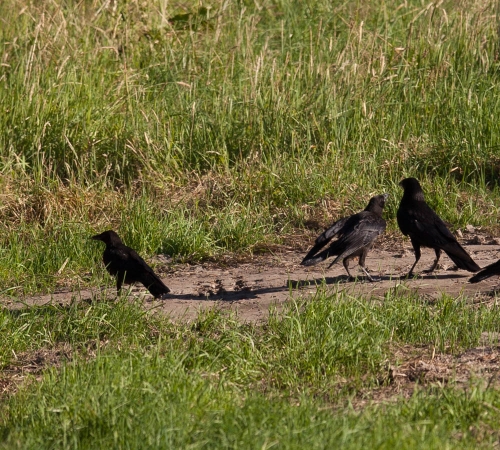 I haven't tried photographing the swifts, swallows and house martins visiting the pond this year. Today I gave it a go. Of the 90 photos I took, this was the only keeper.

The carrion crows that nested in the large conifer across the road, have been flying around with their fledglings for the last couple of days. Here's a distant photo of the youngster begging for food.

Last night was a perfect night for moth trapping as it was mild and there was little or no moon.

There were over 50 species in the trap this morning including two new species for the garden; a female leopard moth and a bright wave. The bright wave is a red-book species in the UK and I've never seen one before.

We've been watching a mullein plant growing for months now and we were convinced it wasn't going to flower before the cows come to graze. But today it was finally flowering.

Unfortunately, the warmth has also brought out the horse flies. This one flew into the house and I managed to swot it before it did any damage. Up close and with the danger removed, she's actually an impressively attractive animal, but those biting parts are ferocious. 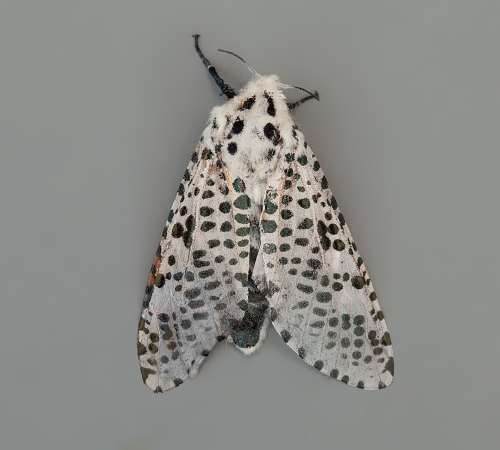 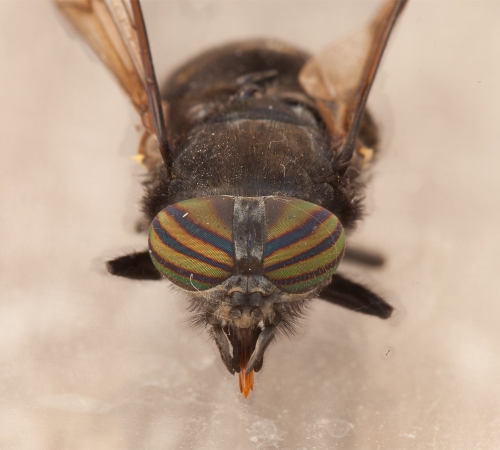 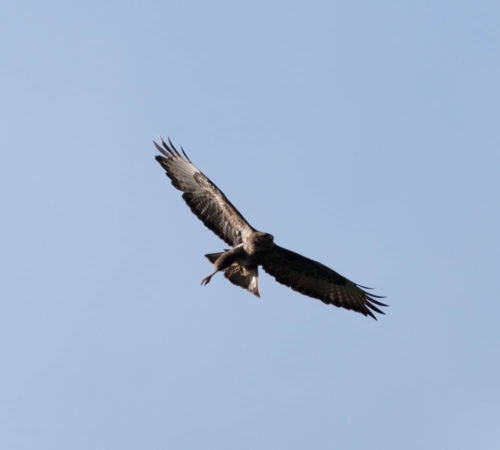 We saw the buzzard with the bad leg again today. I saw him perch with some difficulty in a tree but he seems to be otherwise healthy.

The weather was quite changeable today alternating between warm sunshine and cool and overcast. There were some spectacular clouds over Freudenstadt which I photographed with a polarizing filter for added drama. 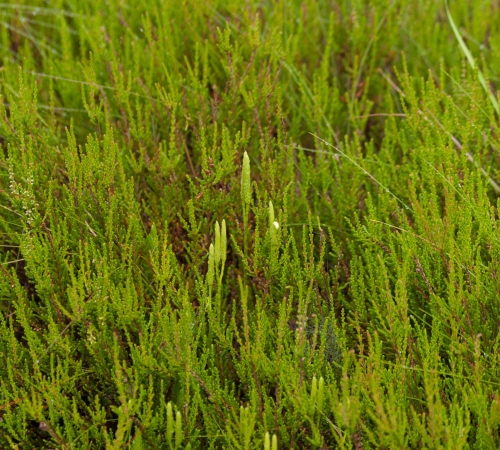 It was a miserable day today. We went up to the Zuflucht skilift this morning as it is meant to be a good place to see birds. It was foggy and cold which meant bird spotting was out of the question.

We were pleased instead to find a small patch of common clubmoss growing amongst the heather at the top of the ski lift. This is the third of the club mosses we're likely to see around here and the one that we haven't see previously. I had the wrong lens on my camera for a decent photo, but here's the best I could manage until we go up again with a macro lens.